Maybe the dingo ate your baby

The past 2 days have been really good for Rambo. Yes, I've risked it again by saying this. I just can't seem to learn my lesson. But he's been so darn cute that I had to share. He's moving all around, grabbing things, kicking his legs. I laid him on his back and he rolled onto his side. Crazy man. He can't make any noise but if he could he totally would.

All the nurses come over to say hi and flirt with him. He's pretty popular. And they all say the same thing. Well, the same 2 things: "Look at that hair!" and "If it's gonna happen to anybody it's gonna be him. Poor boy can't get a break." But it appears the past few days he has caught a break - finally. The only trouble he's had is the hiccups.
He's been moved back to a crib and holding his temperature very well. Not too high and not too low. He's being fed and they have actually started compressing his feeds today. Which means instead of continually being fed, he's getting a larger amount of food for 2 hours and then nothing for 2 hours. They are trying him full time on CPap and off the vent completely. If he does well then he gets to try out a trach collar. He has 7 more days on his antibiotic given through his central line. All his other medicines are given through the G tube so he can get that central line taken out as soon as he's done the antibiotic and not risk infection anymore. In other words, we're getting closer to coming home :) 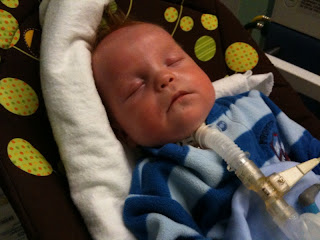 He's made so much progress the past few days it makes me wonder what he's got in store for us next. Hopefully only good things.

He has thoroughly enjoyed his bouncer and I've gotten to hold him as well. 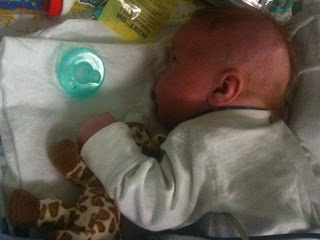 Be jealous of the hair. It reminds me of something from a movie but I can't quite think of what it is. Any ideas? Whatever it is, it's amazing.
Posted by Amanda at 12:12 AM