...be the top scientist in your field or have mad cow disease? These are they type of questions I feel like we've been faced with throughout this whole ordeal. Except there's never an obviously better choice in our case: mad cow disease all the way - I hate science.

Would you rather your son have his heart surgery now or live in anticipation of it for the next 4 months?

Would you rather have your baby at home and deal with all the sleepless nights or have him in the hospital until that stage is over?

Would you rather actually feel like a mom with him in the NICU or have him in absolute constant great care in the PICU but feel disconnected?

Would you rather keep trying to extubate with the hope that it will work this time or take the step of a tracheostomy?

Would you rather all be living together at home or living away and apart so you're dodging the outrageous electric bill that winter brings?

Of course, most of these scenarios we never really had a choice in. It was what it was. But it forced me to look at the brighter side of things. Or maybe it was just the other side not necessarily the brighter one. In any case, I suppose the grass is always greener. 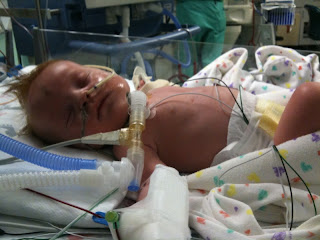 For now, Theodore is doing well; thriving even. Of course, now that I said that he'll probably almost die tonight from an anthrax attack in the NICU or something. Because that's the way it goes. I should have learned my lesson from OMG Megan. She was one of his nurses in the PICU. We were all just hanging out when she says the infamous words, "I wish I had something to do." Well, Megan, you got your wish. And now everyone reading this knows the story of one of his emergency intubations. We forgive you.
Posted by Amanda at 11:22 PM