Every mothers day proves - I'm kind of a big deal. 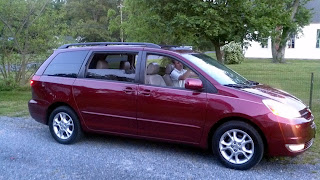 And it's true, if I was you, I'd be jealous of me.
In my swagger wagon.

Well, okay, I don't know about jealous - I mean, it is a minivan. BUT, check out those rear windows that roll down!! Rambo's ride is officially upscale. Now, we'll actually be able to go places as a family. Except, we still really can't go anywhere because of all the limitations of Rambos portable stuff, but we will be cruising to doctors appointments in style.  (And don't tell him I told you, but Ben doesn't even mind it that much. In fact, I dare say, he actually likes it.)

Mothers day came and went as did Emma's 4th birthday. 4. Crazy. We are all still very much adjusting. Still waiting for a nurse. Still very tired. But Rambo was kind enough to let some of the attention be off him and on his big sister for an evening. And she took full advantage. 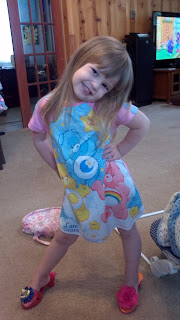 (I don't know where she learned that, but it is pretty cute.) She had a great birthday party. She keeps growing and I'm still trying to wrap my head around the fact that she's a big sister.

As far as Rambo goes, he's pretty status quo. The only issue we are having is that he is not gaining weight. Right now we are in the process of adjusting his feedings to a higher quantity to see if that is that helps. I really hope it does. He has 5 doctors appointments this coming week, 4 of them at JHH. Hopefully we'll be able to update good reports all around.

In the meantime, keep your chin up, your shoulders back, and try not to cry because my car is better than yours.