This past week we had no hot water. I don't know if you can remember the last time you had to be without hot water, but it wasn't fun. You would think maybe it's not such a big deal with the weather still being warm - well, I thought maybe it wouldn't be a huge deal. At least the first day that's what I thought. Then the second day came and the dishes were piling up, no one had had a shower, laundry was piled high. This is when it started getting to me. To even wash the dishes (because we couldn't use our dishwasher - absurd and cruel!!) I had to boil two huge pots of water. By day four I thought enough is enough! On top of all this, Rambo had a stomach bug of some sort and needed constant diaper changes for three days. Needless to say, he was grumpy which meant that I was grumpy which meant that EVERYONE. was. grumpy.

This, however, is not the point. I've done enough complaining in my past several posts. Which, by the way, IS the point. It's sad that having no hot water can get me in such a funk. Yes, we have a lot going on. Yes, it's nice to have the kitchen clean. Yes, its nice to be clean (Ok, this one I'm not willing to budge on. I need to be clean. And thanks to my neighbors who I've totally freeloaded off of this past week, that was possible) But when my attitude is bad because a little luxury was taken away then I need to step back and figure out what the real problem is. It SHOULD bring me joy to sit and read a book with the kids because I can't do the dishes. It SHOULD bring me joy to help them clean their rooms. It SHOULD bring me joy when I hold my son who is upset and see him smile because I'm around. It SHOULD, but it didn't.

In our care group we are reading James. The ever convicting book of James. In high school I had the entire book memorized. Thank you, Mr. Morely. Now, I can only remember the first 8 verses of the first chapter. If you know James then you would think that those verses, the only 8 I remember out of 5 whole chapters, would be appropriate for my current situation. That's what you would think. But you'd be wrong. You see, I can ramble off those 8 verses without thinking twice. I say them but I don't hear them. If I had heard those verses then I would have taken heed. James says to "consider it all joy when you face trials of many kinds." Well, I certainly wasn't doing that. In fact, joy was nowhere on my radar at all. Later he talks about not just being a hearer but being an effectual doer. I was being neither a hearer nor a doer. An effectual avoider was more like it. I was in my own little world of frustration and inconvenience. I'm sure you can imagine that wasn't helpful to my husband, my children or our house as a whole.
Maybe I purposefully blocked out the rest of the book of James because I don't like what he says. :) It doesn't come naturally for me to take joy in stress, difficulties, and chaos. I'd much rather have the instant gratification of anger or short-temperdness (if that's even a word). However, I'm finding out that that gets me nowhere. So, with a different perspective, the goal of being an effectual doer, and a new hot water heater I am out to get through this day. Just today. We'll take tomorrow when it gets here.

"Consider it all joy, my brothers, whenever you face trials of many kinds because you know that the testing of your faith develops perseverance. Perseverance must finish it's work so that you may become mature and complete not lacking anything. But prove yourselves doers of the word, and not merely hearers who delude themselves. But one who looks intently at the perfect law, the law of liberty, and abides by it, not having become a forgetful hearer but an effectual doer, this man will be blessed in what he does." James 1: 2-4, 22, 25

His poopy little butt is becoming less poopy.
He is starting to sleep better because he is feeling a little better.
He weighs 16 pounds 8 ounces!!
The doctor says no signs of teeth but I disagree. What does he know? :)
He is becoming a little man: 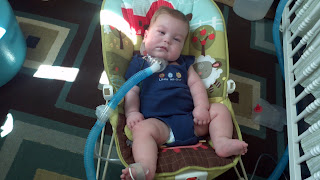 Look at him all kicked back in his chair. He looks like his grandfather. I won't say which one.