Today Rambo is 9 months old. Unbelievable. He is turning from a baby into a little boy. Every time i look at him its bittersweet. Thinking about how far he has come is weird. It actually seems like a different world or he can't be the same baby. And in a way, I guess that's true.
He is now ridiculously chubby. We took him to the doctors and as the nurse went to take his blood pressure she said she wasn't sure the machine would be able to read it through all his fat. Indeed, that was the case. Legs and arms were tried to no avail. He is trying (or at least he did once) to turn himself over to his belly. He can even sit up on his own for a few seconds at a time. SLOWLY we are making progress. And what could this be? 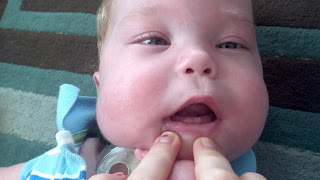 Yup. It's the tooth the doctor said wasn't there. The second one is close behind.

We narrowly avoided being admitted to the hospital yesterday, but thankfully, he turned the corner just in time. He had been running an increasing fever for a few days and was becoming more and more miserable. He was coughing almost constantly. After a trip to the pediatricians and phone calls to the pulmonary doctors it was decided that if he couldn't get back down to his normal oxygen requirement he would need to go. I guess hearing those words scared him into submission because we turned his oxygen down and he did fine, his fever broke and he was much more comfortable. His lungs are still pretty junky. The doctor called it 'a pnemonia' because he didn't know what else to call it (nothing new). Rambo is getting a few extra meds but he appears to be getting much better. Another pediatrician visit today, pulomonary tomorrow and hopefully we'll be able to steer clear of all hospitals.