Dare I say it?

But I'll give it to you like this: He's ooking -lay etter-bay oday-tay an-thay esterday-yay.
Maybe he won't catch on.

It appears the IV antibiotics and steroids are what he needed. And he is looking ell-way. 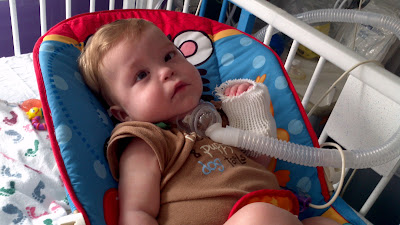 Don't do it! Don't feel sorry for him. That's what he wants you to do with that sweet sad pitiful look on his face. Resist! 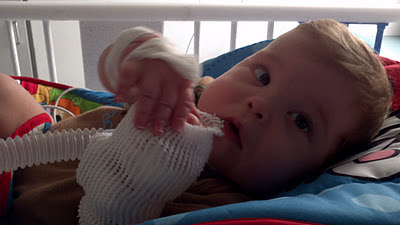 Okay, even I can't fight this one. He's so coot! Poor wittle baby in da big ol' mean hospidal.

He gets an xray tomorrow - hopefully we'll see ogress-pray. His oxygen when he is sleeping was weaned to 40% and he has done ell-way so far. He seems appier-hay. Best case scenario according to doctors is ome-hay in a ew-fay ays-day. Here's hoping, kid.