Okay... that's a given. Here is the to do list of things that need to happen so we CAN get out.

(Both of the above have to look good, obviously. We can't just have them done and then go home if they look any worse. So maybe I should say 'good results on the echo and xray.')

The doctor today said that this is a slow supportive role they are playing; making sure he is completely over it this time. With his already weak vulnerable airways they need to be sure this has moved out so that we are not back here in another week in another bad or possibly worse position. So as far as a timeline goes - there isn't one. I don't forsee us being here longer than midweek but lets just pretend I never said anything and see how it goes. However, if we do get out of here in a few days, then just note that I was right. Just like I was right about coffee costing .50 cents up here..... BEN.

On a different note: It feels very strange to see other people (patients, not nurses or doctors) that you know from being here before, who are back again as well. They are like extended family that you haven't seen in a while. But instead of it just being good to see them, it's also sad knowing you are both in the same place... still. Its sort of a comforting depression... but not so much in a depressed way more in a comfort that's depressing. Makes total sense. I now see this is a failed effort in trying to describe this so I think i'm going to abandon ship on this one. If you have ever experienced it on some level than you know what I mean. If not then you may think I'm a crazy person, but I've already admitted to that in prior posts so no big surprise.

Rambo is fighting sleep and I suppose as his mother I'm responsible for helping him give in...  I suppose... 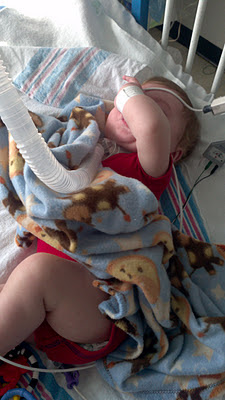 Email ThisBlogThis!Share to TwitterShare to FacebookShare to Pinterest
Labels: IMC