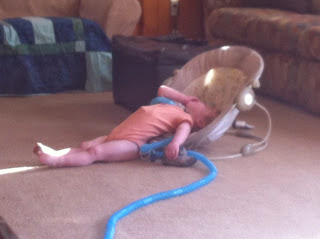 You're doing it wrong.

Theodore has officially broken his bouncer. Bro-ken. The actual gears (or whatever) have been stripped (or whatever). Look, I'm not an engineer, okay. Basically, it doesn't work. But it's the only one we have so he still sits in it, climbs in it, lays his head in it.... And you should see him put himself to sleep in it. He's so peaceful when he sleeps, but getting there is the exact opposite. He sits forward as far as he can and literally throws himself against the back. You'd think it would hurt his head but he will do this over and over again until he just passes out.

Actually... now this has me wondering if he is, indeed, passing out or just 'passing out'. Hmmmmmm. Maybe I shouldn't let him do that any longer...

Whatever. It keeps the peace.
Posted by Amanda at 11:01 PM